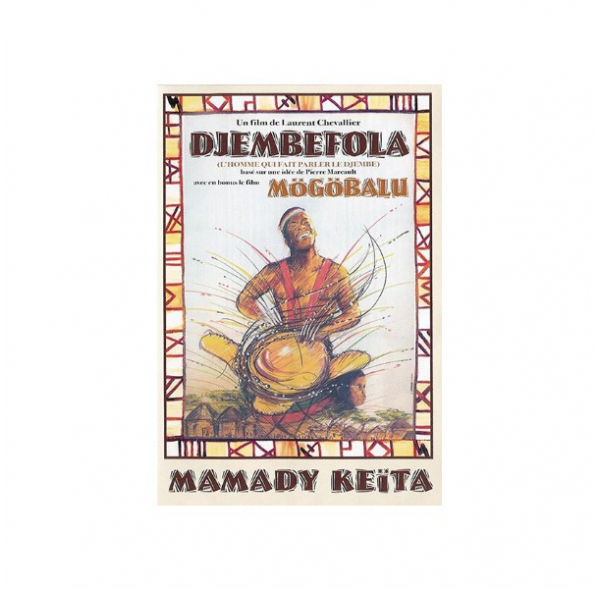 Djembefola and Mögöbalu, two documentary films by Laurent Chevallier, with Mamady Keita and the Masters of Percussion - ...

Djembefola and Mögöbalu, two documentary films by Laurent Chevallier, with Mamady Keita and the Masters of Percussion - DVD

"Djembefola" is a portrait of African master-drummer Mamady Keita.
It tells the story of Keita's life, from his childhood in a small village in Guinea, where a witch doctor predicted his great destiny. Mamady Keita became a prodigy who at 14 was one of five percussionists selected for membership in the National Djoliba Ballet. The film follows him from Brussels, where he now lives and teaches, on a pilgrimage to his native village of Balandugu, Guinea. From Brussels to Conakry, Guinea's capital, then with a Jeep to the remote village. There, he has a tear-filled reunion with friends and relatives who had assumed he was dead. In addition to sketching a vivid portrait of its subject, the film tells a lot about the essential qualities of this nearly-sacred instrument: djembe. Several extended musical sequences suggest how the instrument's beats and tones become a complex emotional language that serves as a kind of communal heartbeat for the people of Balandugu.

"Mögöbalu" explores the life of a Djembefola in the modern world and the virtuosity of the djembe within the contemporary music scene. The first part introduces us to some of the world's greatest african drummers, during their performances at the "Festival Couleur Cafe". In the second part, L. Chevallier follows Mamady to his village of Balandugu where he gathers some of Africa's greatest musicians and percussionists.
The third part contains an exclusive interview with Mamady Keita. "Mogobalu" takes a closer look at the performance aspects of Mamady's career, along with his collaborations with other great drummers around the world. With a lot of special guests: Famoudou Konate, Fadouba Oulare, Soungalo Coulibaly, Dudu N'Diaye Rose and more others.