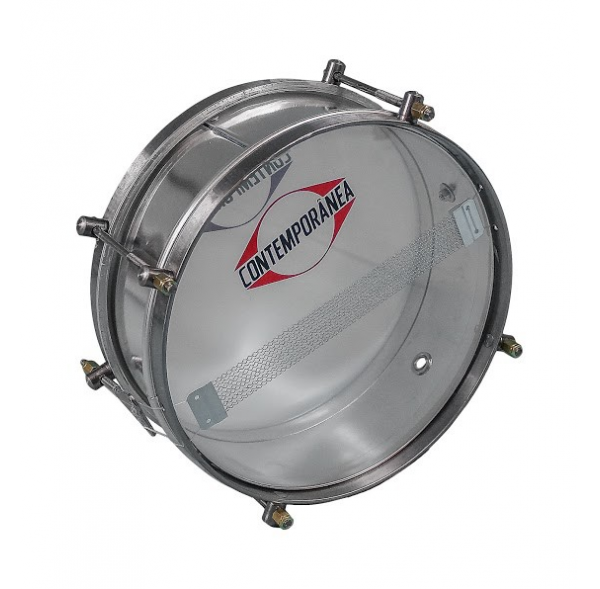 A Caixa is a snare drum, similar to those you find in a conventional drumset and in western marching bands. It actually comes directly ...

A Caixa is a snare drum, similar to those you find in a conventional drumset and in western marching bands. It actually comes directly from European marching bands.
Caixa is played in "baterias" i.e. very large percussion ensembles that parade during the Rio Carnival.

Caixas can be found in various dimensions and with various names ("caixa de guerra", "tarol", "malacacheta"...) but generally have a 12" diameter. A caixa has nylon skins on both sides and its metal shell can be 2.7 to 7.8 in long (deep). In Carnaval "baterias", caixas snares often consist of a piece of wire or a doubled, (metal wound) guitar, bass-guitar or piano string. The wire is directly stretched across the top head. Nowadays, though, caixas sometimes have more elaborate snares on their bottom drumskins (more similar to a conventional snare drum).

The player holds the caixa at hip height, with a belt or a shoulder strap. Its musical part consists in playing a semiquaver "continuum" with specific stresses, creating a determined "ostinato" (constant rhythmical pattern) that varies from one Samba school to another, which helps recognizing each school's own groove.

The mini guerra Contemporanea Light model has an adjustable snare under its lower head.
Its quality will satisfy both beginners and experienced players.