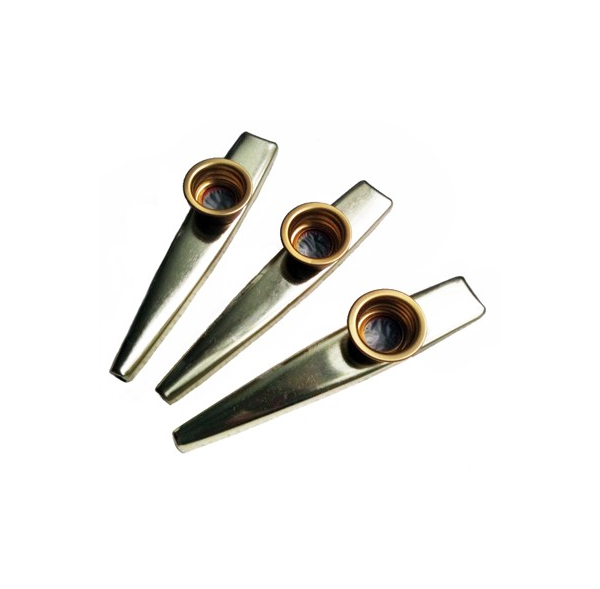 A kazoo is a simple instrument made from a small, tubular piece of light metal. In addition to its two openings on both ends, it has a ...

A kazoo is a simple instrument made from a small, tubular piece of light metal. In addition to its two openings on both ends, it has a third round hole on its upper side, lidded by a piece of thin paper (cigarette- or wax paper) that is fixed to the tube with a rubber washer, which makes it easy to replace.

As a type of mirliton (vibrating membranophone), the kazoo is based on a principle that’s been used for centuries in many types of instruments: modifying a sound by way of a vibrating membrane. In Africa, for example, the same device is applied to the gourds that are used as resonators under the keys of a balafon.
This is called the mirliton effect.

The player sings into the kazoo’s mouthpiece and his/her voice is modified by the buzzing timbral effect of the paper seal.
The kazoo is a wonderful instrument to use with children, for it doesn’t require any playing technique. It is, therefore, frequently considered a funny instrument or a toy. But it has been used in a large variety of serious musical environments, too: from Dixieland-type Jazz bands to pop music (Beatles, Jimi Hendrix…) or musicals. It is often played to simulate trumpet.