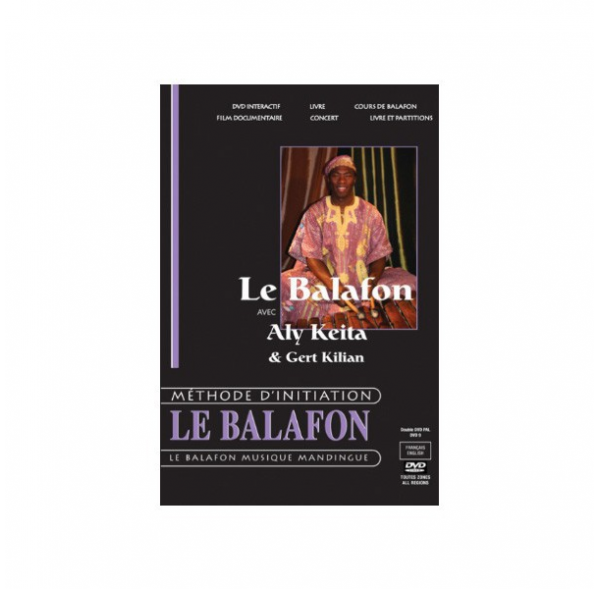 Balafon is one of the most important instruments of West-African musical traditions, especially Mali and Ivory Coast. Abidjan-born Aly ...

Balafon is one of the most important instruments of West-African musical traditions, especially Mali and Ivory Coast. Abidjan-born Aly Keita, whose father is Malian, is among the best ambassadors of this "gourd-vibraphone" called Balafon.

This box consists of 2 DVDs and a thick booklet packed with texts, pictures and scores

The documentary DVD, directed by Philippe Nasse and Gert Kilian, is an immersion into the heart of the bush area in Mali and a small village named Konsankuy. There, Aly Keita returns to his roots. For the New-year celebrations, the village musicians and a band (Super Zamaza), with Aly as their guest-star, play a set of musical pieces in their original context: the very griots' yard. (This same repertoire is studied in the instruction-DVD).
Youssouf and Aly Keita also reveal the secrets of balafon-making. We discover how music is part of their everyday life and a lot of extra, musical surprises...

The method DVD presents the fundamental techniques of balafon-playing. It then focuses on traditional pieces to be played on one or two pentatonic balafons (Kanouzo - Boro Domborola - Djamanatigy - Fanta Mankane and Thindoro), though these may also be played with marimba, xylophone or vibraphone.
Coordinated independence is studied thanks to the detailed presentation of each pattern, hand by hand, phrase by phrase. The possibility of looping and a play-along make practice easier.